Domino presents the new plug and play Hall effect quick shifter kit for the majority of motorcycles, able to manage the blipper during the gear downshift The kit includes the special hall effect Domino sensor, a threaded rod made by 7075 Ergal a steel ball joint rod end, and a special electric wiring, all interfaced with the original electrical connections of the motorcycles This "hall effect" magnetic quick shifter kit has been designed and developed with the aim to solve the well known problems of load cell sensors on the market and improving the rider’s feeling with the gearbox The sensor has a double signal to guarantee an assembly with traditional or inverted gearshift This kit was developed in collaboration with the main team of Italian Superbike Championship

DOMINO fine tuning and validation service on vehicle (support on track and road)
Signal repetitiveness and precision thanks to Hall effect (+/- 2% in tension ) leads to quicker shifting
Downshifting strongly improved during cornering (blipping strategy)
Shifting force optimization by improved spring
Domino patent
IP67 protection
Racing pilots confirm the benefits for Domino Quickshifter instead off Load Cell or similar Hall product
100% PLUG & PLAY on oringal Rearsets - you might need to acquire a longer or shorter shift rod if using on an aftermarket kit.

When ordering your HM Quickshifter, you will need a correct length Shift linkage.  The GP, .. 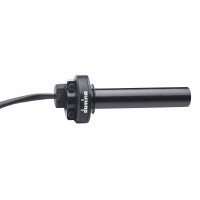